Historically, MTNT, Ltd. lands were home to the People of the Upper Kuskokwim, who depended on local subsistence resources. These lands shaped the People’s cultural values and way of life. The villages received their surface estate land entitlements in 1971 through ANCSA while Doyon, Ltd, the Alaska Native regional corporation in the area, received the sub-surface estate of this land.  The final patent of the land was signed on October 16, 2010.

Today, many Shareholders continue to practice traditions handed down from past generations.

Located 221 miles northwest of Anchorage in Interior Alaska, McGrath was a seasonal Upper Kuskokwim Athabascan village used as a meeting and trading site for Big River, Nikolai, Telida and Lake Minchumina residents in the early 1900s. Being the northernmost point on the river, accessible by large riverboats, McGrath became a regional supply center.

McGrath is named for Peter McGrath, a local US Marshal and was originally located across the Kuskokwim River until a major flood in 1933. After the flood and with changes in the course of the river, the old site was left on a slough rendering it useless as a river stop. After the move and by 1940, McGrath welcomed an airstrip, communications complex and school and served as an important refueling stop for Lend-Lease equipment during World War II.

McGrath is home to McGrath Native Village, a federally-recognized Tribe, and approximately 350 residents primarily of Athabascan, Aleut, Yupik, and Iñupiaq descent. While there are no publicly maintained roads to McGrath, there are local roads with winter trails marked to Nikolai and Takotna. Residents rely on and receive cargo through the ​air and barge shipments.

McGrath is also a checkpoint for the Iditarod Sled Dog Race which takes place in early March from Anchorage to Nome, Alaska.

Nikolai is an Upper Kuskokwim Athabascan village located in Interior Alaska on the south fork of the Kuskokwim River, 46 air miles east of McGrath. It has been relocated at least twice since the 1880s. One of the former sites was reported in 1899 to have a population of six males. The present site was established around 1918. Nikolai was the site of a trading post and roadhouse during the gold rush. It was situated on the Rainy Pass Trail, which connected the Ophir gold mining district to Cook Inlet. It became a winter trail station along the Nenana-McGrath Trail, which was used until 1926.

By 1927, the St. Nicholas Orthodox Church had been constructed. In 1948, a private school was established, and in 1949 a post office opened. Local residents cleared an airstrip in 1963, which heralded year-round accessibility to the community.

Nikolai is the home to approximately 90 residents primarily of Athabascan descent and the Nikolai Village, a federally-recognized Tribe. The community is active in subsistence food-gathering and prohibits the sale, importation, and possession of alcohol.

Takotna is located in Interior Alaska on the north bank of the Takotna River in a broad scenic river valley, 17 air miles west of McGrath in the Kilbuck-Kuskokwim Mountains. It has been known as Berry Landing, Portage City, Takotna City, Takotna Station, and . In 1908, merchants in Bethel hired Arthur Berry to bring supplies up the Takotna River. The village was founded at the farthest point on the river Berry’s small sternwheeler was able to reach. By 1912, the community had several stores that supplied miners. Gold discoveries in the upper Innoko Region enabled the town to prosper.

By 1919, there were several commercial companies, roadhouses, a post office, and about 50 houses. In 1921, the Alaska Road Commission improved the Takotna-Ophir road, and an airfield was constructed. In 1923, a radio station began broadcasting in Takotna, and the town had its own newspaper, The Kusko Times. Low waters at times precluded the arrival of steamboats, so the Takotna-Sterling Landing road was constructed to the Kuskokwim River in 1930. In 1949, construction was begun on nearby Air Force Station. It was the site of a White Alice Communications System, but operations were phased out during the 80’s.

A federally-recognized tribe is located in the community – the Takotna Village. Access to Takotna is by air or water. The community has 80 miles of local roads that connect with Tatalina AFS, Sterling Landing, and existing mines. A winter trail is marked to McGrath and is a checkpoint for the Iditarod Sled Dog Race. 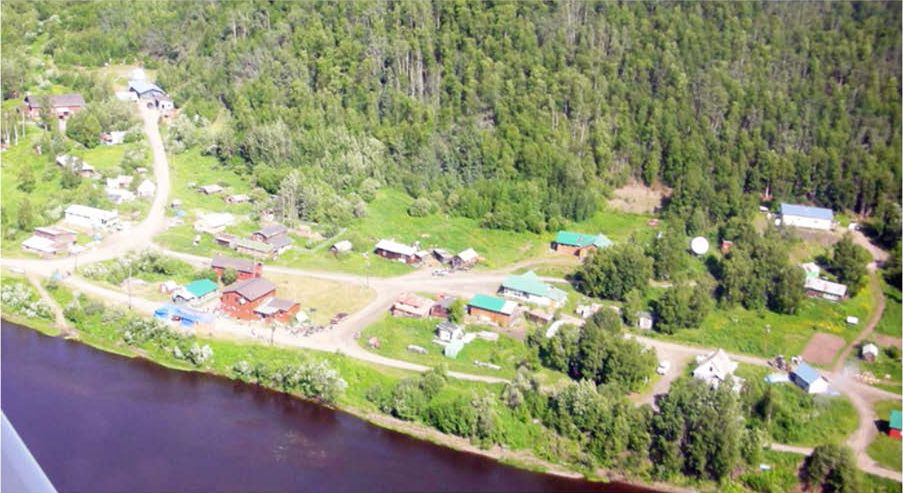 Telida is located on the south side of the Swift Fork (McKinley Fork) of the Kuskokwim River, about 50 miles northeast of Medfra, Alaska.

Athabascan Indian folklore indicates Telida’s descendants were from two sisters, survivors of a Yukon Indian attack, who fled from the Denali area to Telida Lake where they discovered whitefish at its outlet. Telida means “lake whitefish” in Athabascan. The women were later discovered by stragglers from the Yukon party who married the women and settled at the lake.

The village has had three locations. The first was located over one-mile upstream which was first visited by army explorers in 1899. When the course of the Swift Fork changed, the first site was abandoned and is now called “Old Telida.” In 1916, some residents moved to the present-day site, “New Telida,” four or five miles downstream from Old Telida.

A Russian Orthodox chapel, St. Basil the Great, was built at the old site in 1918. In 1920-21, Telida was a stopping point on the McGrath-Nenana Trail and hundreds of people used the roadhouse. In 1935, the old village flooded, and the remaining residents relocated to the new site. In 1958, a fire cleared an area in which the villagers constructed an airstrip. Many families moved to Takotna during the school year and lived in Telida only during summer months. A local school was built in the 1970s, but because the population declined, the school was closed. 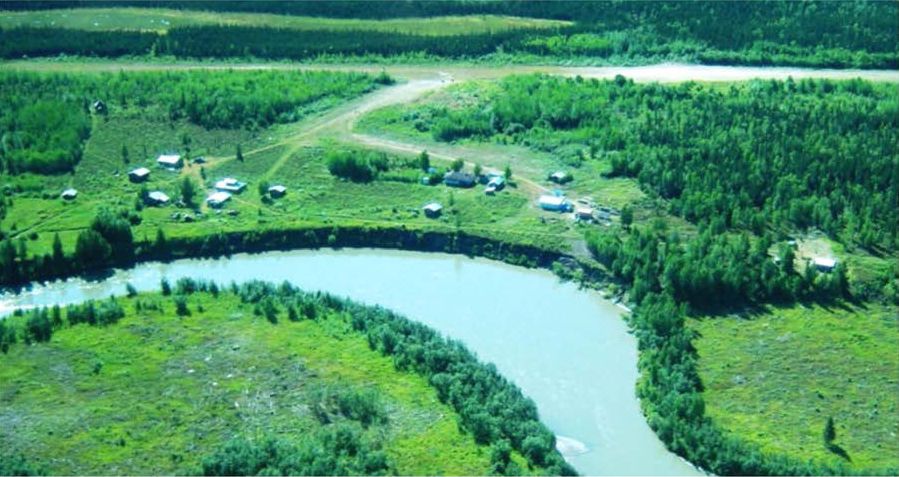